Does Kief Get You Higher Than Bud? [Answered HERE]

When you’re looking for the perfect high, there are many things that you’ll try to do. You may change your smoking set up or look for different strains that amp up the potency. Some users even change from using flowers to concentrates since they tend to be so much stronger. But that’s not for everyone, of course.

If you’re inclined to continue using flower over concentrates, you may be happier using kief. Kief will occur naturally when you’re grinding your weed, so it’s perfect for people who don’t want to use oils, shatter, or other forms of dabs.

In this article, we’re going to cover everything you need to know about kief! We’ll explain why so many people like to use it to get a more potent high, as well as how you can collect, smoke, and store kief. Of course, we’ll tell you the best ways to use it, too. Let’s get started!

Cannabis plants are covered in large, resinous glands called trichomes. Trichomes are what make buds sticky, and they’re also what gives you the desired effect when you smoke them. These glands are filled with THC, CBD, and other compounds called terpenes.

After harvesting, these parts of the plant dry up and break off. This is when they become kief. When you look at kief, you’ll find that it’s darker in color than trichomes, and that it ranges from being a deep gold to a dark brown. In comparison to the trichomes on a bud, kief is less sticky, and more powder-like. How do you collect kief, though?

Well, most people collect kief in their weed grinders. Many 4-piece grinders allow users to collect kief without much of an issue. Because kief is powdered, it can easily be separated from the bud that’s been broken up in your grinder. Just make sure that your grinder has a kief catcher, otherwise it will be next to impossible to collect it effectively. We’ll cover more on that later, though.

It’s also important to keep in mind that kief can be purchased in stores, as well. You need to make sure that you’re getting good quality kief when you do this, though. The purer the kief, the lighter the color. This is because it’s been cleaned, and there’s no plant matter with it. If the kief is dark, it means that it hasn’t been well-cleaned, and it’s not going to be as pure.

What’s the Difference Between Kief and Hash?

Some enthusiasts tend to mix up kief and hash. In reality, they’re very different from one another, but they are similar. In fact, hash is made from kief! Hash is considerably stronger than kief, though, with THC levels reaching up to 80%.

Kief is made by collecting the dried trichomes from your bud – we’ve covered that. Hash is just the next step. Hash is made by heating kief and putting it under pressure. This turns it into a wax that can be used as is, or it can be extracted as a liquid.

Many people think that hash is easier to use, though it’s not nearly as easy to make. Kief can be made at home using a grinder – that’s all it takes! Hash requires a bit more labor, but it can be pressed by hand, or by using a hot water bottle. It just takes time and practice.

Is Kief Stronger Than Weed?

We’ve established that hash is far stronger than kief, but can kief actually compare to bud in terms of intensity? Kief, without a doubt, has more potency than bud. Some of the strongest marijuana varieties have been tested at 30 percent THC. Dependent on your tolerance, that might be fatal. Kief is far more potent than bud and hash.

Kief typically contains between 50 and 60 percent pure THC. This makes it twice as potent as the strongest flower on the market. But that’s not the end of it. Consider it a median figure. Kief can be sifted down to roughly 80% purity by those who are skilled at the process. It stands to reason that anything composed almost entirely of dried trichomes, with only a trace of cannabis, would be potent.

How Do You Collect Kief?

There are a number of different ways that you can collect kief. Of those methods, though, using a weed grinder is definitely the best. Most 3-piece and 4-piece weed grinders come with a built-in kief catcher or kief collector. This is a small chamber that sits behind a fine screen. The screen lets the broken down kief pass through, but not pieces of cannabis. All you have to do is open the collector and your kief is there and waiting! 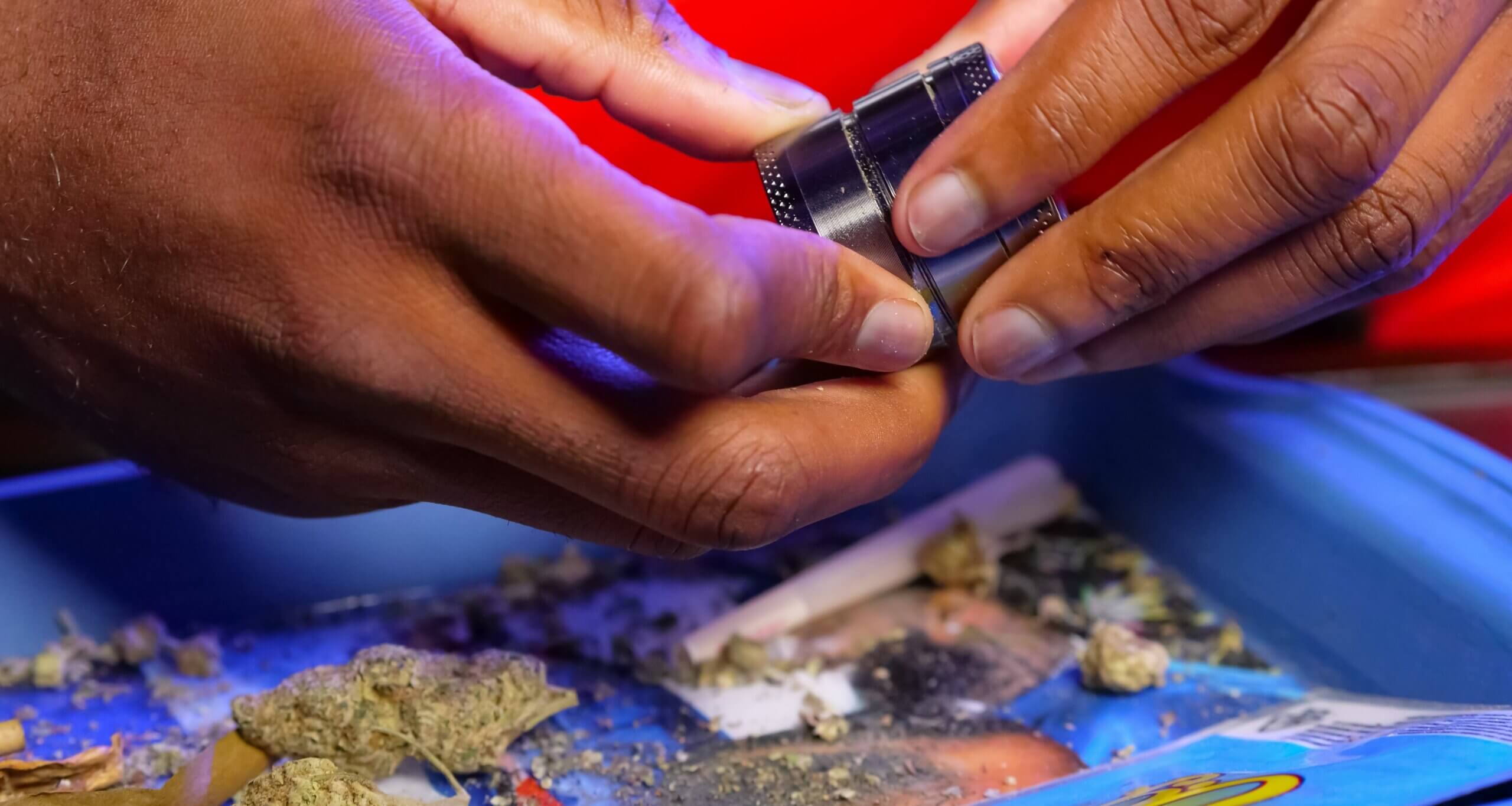 While using a grinder is the easiest way to collect kief, it isn’t the most effective. People who specialize in kief collection use multiple screens. These screens are layered on one another. Weed is then dry sifted down, through the screens. As it passes through the screens, kief is “purified” and the strongest kief ends up collected at the bottom. While this is effective, a grinder is easier, by far.

How Do You Store Kief?

When it comes to storing cannabis products in general, there are a number of ways to do so. The best way is something that people like to argue. However, if you’re trying to store your kief properly, it’s pretty much agreed that it should be stored in an airtight glass container. This can be something as simple as a mason jar, or as complicated as a dedicated kief-keeper.

The reason that kief should be stored in an airtight glass container is to preserve its freshness. Just like bud, pollen can become stale, making it a lot less enjoyable to use. Glass is used because kief sticks less to the material, but it does still stick. It can easily be scraped off, though, especially after sitting in the freezer for a few hours.

Different Ways to Use Kief

So, you’ve managed to collect all of your kief. Now what? Well, there are a few different ways that kief can be used. Check out a few of the most popular below!

While many people believe that kief can’t be vaped, they’d only be partially right. Sure, kief can’t be vaped on its own, but that doesn’t mean that it can’t be vaped. If you’re trying to vape kief, you have two options. First, you can press kief in between two pieces of bud in your vaporizer chamber. Then, just make sure it’s vaped at a high temperature, like you would flower.

Additionally, you can turn your kief into an infused liquid to vape it. This process is a bit more convoluted, but there are plenty of guides online that can teach you how to make it happen!

Many enthusiasts use kief to enhance their typical weed-smoking experience. Because kief is THC crystals in powdered form, it can be easily added to a joint. Simply make a joint the way that you normally would, then sprinkle kief on top of the broken up bud. The amount of kief you add will determine how strong your joint is, so make sure that you use an amount that you can handle.

There are a couple of different ways to make edibles with kief. The two most popular are making kief infused sauces or making cannabutter enhanced with kief.

Sauces are arguably the easiest way to turn your kief into a delicious edible. All you need to do is take your collected kief and add it to hot oil in a saucepan that’s over low to medium heat. The kief will melt into the oil, infusing it with THC. Then, you can use the oil to make the sauces that you normally would. This takes some time, normally anywhere between 20 and 40 minutes. Then, add in your other sauce ingredients and continue to cook.

Cannabutter can be made with kief, as well. The only thing you have to do is add kief to the bud that you’re making butter from. It’s as simple as that. Obviously making THC butter is more difficult than making a sauce. Still, this is a great way to give your baked goods a real kick.

Rosin is becoming more popular in the cannabis community. It’s easy to make, and it’s a great way to make the most of your kief. Simply put your kief into a parchment paper, then press it with heat. This will make a concentrate that’s potent, and help you use your kief in a different way. The way you apply heat and pressure doesn’t have to be complicated – many people just use a hair straightener.

If you find yourself becoming a kief connoisseur, there are industrial heat presses that can be purchased, too. They’re only a few hundred dollars, and they make making rosin an easy process, especially if you want to do it in bulk.

Does Kief Get You Higher Than Bud (FAQ):

Does Kief Get You Higher Than Bud?

THC and other psychotropic cannabinoids are concentrated considerably more highly than in the cannabis flower from which the concentrate is made.

Why does kief get you higher than Bud?

Cannabinoids, such as tetrahydrocannabinol (THC) and cannabidiol (CBD), are produced mostly by trichomes, which are also the primary source of terpenes are responsible for giving cannabis its distinctive earthy scent. Once collected, Kief is essentially a concentrated version of cannabis, resulting in a more potent high.

What kind of high does kief give you?

Kief causes an intense high for users. In contrast to most flowers, which typically contain 12-25% THC, kief typically registers at around 50% on THC testing. Some of the purer types of kief can even contain as much as 80 percent THC.

What gets you higher kief or hash?

Hash, which is kief that has been concentrated, will get you higher than kief on its own because you are inhaling more of it than you could with it in its original state. If you enjoy a strong high, you should begin by gathering your kief and then work your way up as you become accustomed to higher and higher potency levels.

How much should a gram of kief cost?

Many shops sell kief by the gram, and the price can range anywhere from $30 to $80 depending on where you live and if you consume marijuana for recreational or medical purposes.

What is the point of kief?

Kief helps you to obtain the THC, cannabidiol (CBD), cannabigerol (CBG), and other cannabinoids that you desire in a rapid and easy manner. Additionally, it removes the plant material that can result in a more unpleasant smoking experience. Kief is not just simple to acquire, but also uncomplicated to work with.

2 thoughts on “Does Kief Get You Higher Than Bud? [Answered HERE]”