How to Use a One Hitter Pipe? [Ultimate Stoner’s Guide]

As time has gone on, there have been a number of different innovations in stoner culture. Popularity has been growing with many of the different new ways to consume THC. Vaporizers and concentrates have become mainstream, as have highly potent edibles and custom glass options. Since legalization, just about anything you can dream of is readily available.

However, while plenty of items have become popular, there’s still a dark horse in the crowd. One hitter pipes are still hardly talked about. Maybe that’s a good thing, though. With popular items becoming harder to find due to supply chain issues, having more one-hitter pipes available seems like a win to us.

If you haven’t heard of a one hitter pipe, the name is accurate. These little pipes are great for having a discreet session all to yourself. If that’s something that interests you, keep reading. We’re going over everything you need to know about one-hitter pipes in this ultimate guide!

What is a One-Hitter Pipe?

A one hitter pipe is quite possibly the best weed accessory available on the market today. They’re perfect for a quick hit when you need one. Because of their small size, they allow users both discretion and dosage control. This means that you can smoke one just about anywhere, and you don’t have to worry about being too high. It’s just the right amount of weed to keep you going.

The best part about using a one-hitter pipe is the simplicity it brings to smoking weed. You don’t have an entire rig to worry about, meaning that setup takes no time at all. It also means that cleaning is quick and easy. The one hitter pipe is the best solution for getting a good toke while on the go, without a doubt.

Picking the Right One Hitter

Additionally, some one hitter pipes come as a set with a dugout. A dugout is a small carrying case that holds your one hitter pipe, as well as the ground up weed for it. Often, there’s just enough weed for a hit or two. The advantage of a dugout, though, is that it makes the one hitter much easier to pack.

How to Pack a One Hitter

Packing a one hitter might seem a bit difficult at first due to the size of the pipe. It’s small, so you may think that you need more nimble fingers to get things going. However, packing a one-hitter doesn’t have to be hard. In fact, if you follow the steps below, you’ll find it’s as easy as packing any other pipe, just on a smaller scale.

Keep in mind that your weed should be ground up. While you can easily slap a nug in your pipe and call it a day, it won’t provide a smooth session. One hitters are all about discretion. It’s hard to stay discreet when you’re coughing from a harsh hit.

Additionally, keep a small funnel on hand. You can find specially made accessories for one hitters, or you can grab a tiny culinary funnel. You don’t need a funnel, so to speak, but it helps prevent you from making a mess.

Step 2: Transfer the Ground Weed to Your Pipe

This is as easy as it sounds. All you have to do is get the weed into your pipe without spilling it everywhere. With a one hitter that has a bowl, this is pretty easy. For the open-ended cigarette-style hitter, do this carefully. Your funnel may not help here. Alternatively, you can pile your ground weed in a small container and press the end of the pipe into the pile. This works pretty well.

The last thing to do is pack your bowl. Just like anything else you’re smoking from, keep in mind that your weed can’t be packed too tightly. If it is, you’ll disrupt airflow. Without good airflow, you’re not going to get the hit you’re looking for. Remember, this is a one hitter. It’s meant to be a quick hit to keep you high on the go. No need for a monster pack. 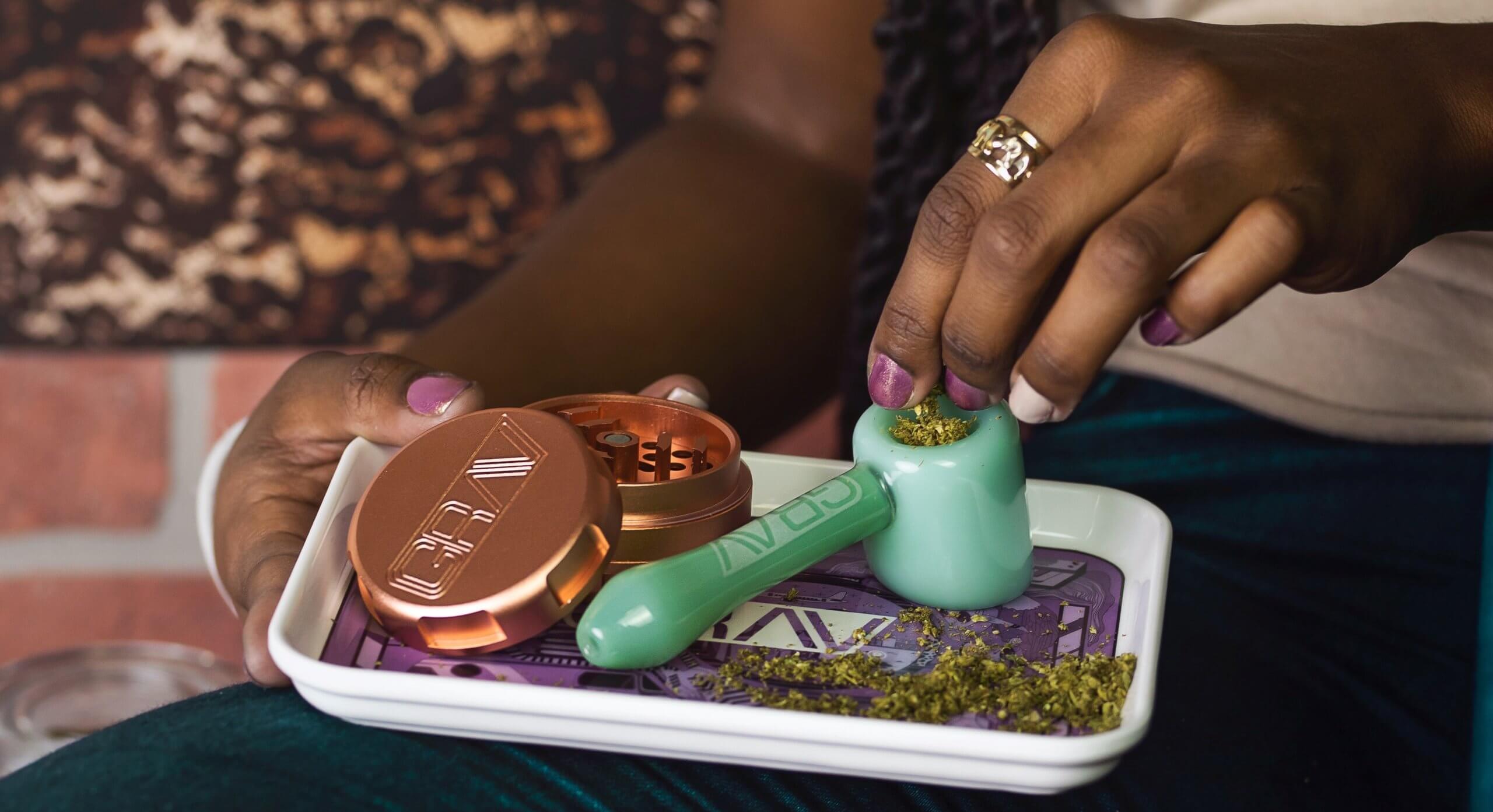 How to Smoke a One Hitter

Your one hitter has probably been on the move with you. Before you smoke it, take a look at your weed one more time. Make sure that it’s packed adequately. If it seems to be packed too tightly after being jostled around, break it up a little bit. You need airflow.

Bring the pipe’s mouthpiece to the center of your lips. Because the pipe is so small, it’s important to make sure that you get a good handle on it. Not being able to inhale would be a tragedy.

When the pipe’s at your lips, gently inhale as you light the weed at the end of the pipe. Once you’ve inhaled, be sure to hold it for a moment. You want to feel the relaxation wash over you as you take your hit.

After you’ve held the smoke in your lungs for a moment, exhale slowly. If you’re aiming to be discreet, do so in a way that others won’t notice you. Consider exhaling down, towards your armpit.

The Benefits of a One Hitter

Using a one hitter comes with a number of different benefits. If it didn’t have its advantages, people wouldn’t use them, and they wouldn’t be around still. If you still need convincing that one hitters are an excellent piece of paraphernalia, check out some solid reasons as to why you need one below.

One hitter pipes are simple. They might take some getting used to since they’re so small. However, once you get the hang of packing them, everything else comes easy. These tiny pipes can be taken anywhere, and they require nothing but a moment and a lighter.

Sometimes, you just need convenience, and that’s exactly what a one hitter pipe gives you. Legitimately the only part of a one hitter that requires any effort is packing it. With a dugout, packing is easy. There’s no excuse to not have a one hitter in your weed toolkit.

They Conserve Your Stash

A one hitter is designed to provide you with just a single hit. This is enough to give you the high that you’re looking for, and you don’t have to use a ton of weed to reach it. This comes in handy in a number of different scenarios.

First, if you’re running low, it lets you keep an eye on your weed before running out entirely. Going dry isn’t something that anyone wants to do. If you’re ever worried about running out of bud before you can get more, a one hitter is going to prevent you from being weed-less.

Plus, if you happen to run out of weed for your other methods of smoking, chances are you’ll have just enough for your one hitter. This can be a real lifesaver when you think you’ve run out entirely. Getting that last hit before you can acquire more weed tomorrow is necessary sometimes.

Weed has a very identifiable scent. For the most part, everyone can tell when someone in the crowd is smoking. While that’s great at a concert or an event, you don’t always want to be so noticeable when you’re smoking. A one hitter can help you control your odor.

One Hitters are Discreet

We know that we’ve touched on this a number of times, but it really is the best part about these pipes. They’re small enough to be carried in a pocket or a purse. They use a very small amount of weed in a very quick manner. You can use them to control both your smoke and your smell. One hitters are the stealth pipes that everyone needs.

If you’ve got a one hitter in your toolkit, you’ve got a pipe that can be smoked just about anywhere. It takes a minute to learn how to pack it, but once you have that down, you’re golden.

How to clean a one hitter pipe?

Watch the video below to get the best idea.

How to Use a One Hitter Pipe (FAQ):

How to Use a One Hitter?

The standard method of smoking them vertically involves creating a fist and holding the piece between the middle and ring fingers, with the index finger protruding to allow for inhalation. They can also be smoked in the traditional horizontal pipe position.

Do you light a one hitter?

To get the most out of your one-hitter session, we suggest lighting it and then tapping the bowl of marijuana in and out of the flame. You don’t have to do this every time, but if you’re a beginner, it might be helpful to see the effects of different burns on your loaded one-hitter chamber.

Are one hitters worth it?

In 2022, the one-hitter remains one of the most popular and efficient ways to enjoy a joint or jointless joint. The one-hitter pipe is ideal for covert smoking, but it also helps you save money, reduce your tolerance and microdose, and preserve your cannabis supply.

How do I get the most out of my one hitter?

Prepare your dugout by grinding your goods. Don’t over or under-grind your weed; instead, use a grinder.
Have your one-hitter ready and packed, and carefully lower the bowl pack end of the pipe into your dugout.
Fire it up, have a puff, and clear the decks for later use.